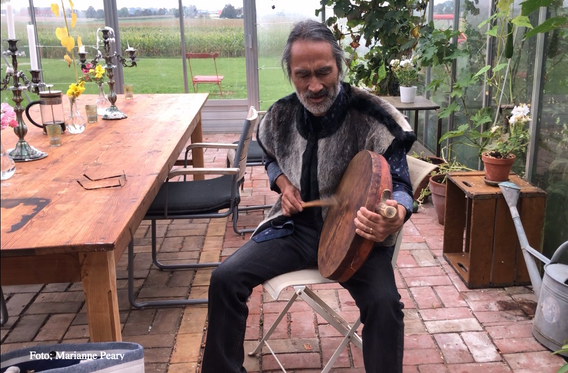 Inughuit Native traditional songs “ingmirutit” (reloading the old memory) are inherit and pass on through generations to generations for several of ten thousands of years. The songs are from our ancestor who fell from heaven before there was a moon. As other beings born on the Earth we all forget our inherit life from our ancestors and live the life “lost in our mind”. It happens, too, with my ancestors; they also forgot at that time their inherit life.

People were coming to the Arctic without any inuit drums and songs and with no joy only hard work to survive. It was at that time when the moon was young, at that time when human being could turn into the animal, and animals could turn into the human being. It is a long, long time ago. At that time our ancestor Naujarpak (The Giant Seagull) who was living in the top of the mountain Pingurhuit (pyramid like mountain top covered with stones) with her son. She was the last one of our ancestors of many who inhabited the Earth a long, long time ago and still had the memory of our ancestors’ life. But she was so old and was about to leave the life on the Earth. She was so sad that the human being was too busy keeping up on everything to survive their own values than to stop and listen to her about the heritage from the ancestors before she left the Earth life.

The old inuit couples had a son who went out hunting for his old folks and came close to the mountain. Then suddenly there was a young tall stranger wearing the bird cloth – (these people could be invisible but could appear anytime, anywhere and anyhow) – and asked him if he wish to follow him to the top of the mountain where his old mother lived. The old woman was happy to meet a person who wish to listen to her. She began to open her arms and spread them out. Her arms became wings of a Giant bird. The feathers began to move as if the wind was blowing through them. The young human being was watching what was coming out of her feathers. He saw the stars, galaxies, suns, drums, songs coming out of her feathers.

When he returned to his folks he told about his vision and would invite all the people to join him when the moon turn blue (super moon). Then when time came couples from different direction approached to attend the festivity. They were all showing their ancestors the respect by drumming and singing their songs and the ancestors were dancing like the northern light to show their appreciation. When the festivities were over the people were returning to their places and returned to their origin life as the animals all over the Arctic.

As mentioned the songs are from the Universe where our ancestors are living. The songs are about life, feelings, expressions, entertaining, right, everything about being a part of creation.

We are the descendants to sing the songs to get the old memory back to remember our ancestors to greet them, and our lost memory and life can be healed to heal to a whole life.

To the top
Our heritage