I am happy to share my ancestors knowledge and messages of ancient time in the Arctic. I talk about my people, Inughuit, their worldview, wisdom and traditions.

Everything is life, life is everything. Everything! The life has no death when the life is eternal. The Earth life is the lowest physical density where we live with amnesia to challenge the man-made values that affect our judgement, seeing and behaviour. The most important is not the values of man but how you treat other people and the creation.

This interview was recorded in Praha, Czech Republic 2021.

The talk was about about spiritual aspect of life in modern society.

A meteorite in Greenland: Exploration, exploitation, and knives from space. Listen 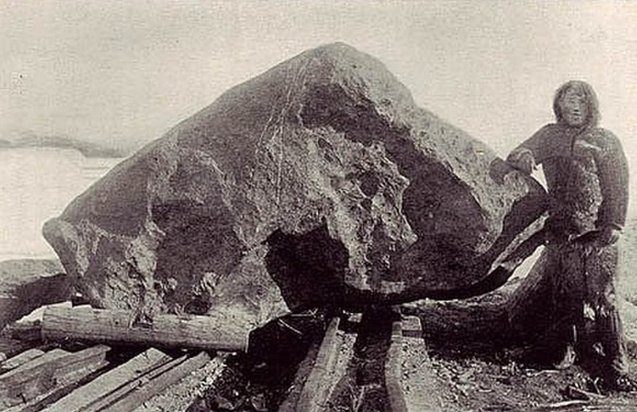 Thousands of years ago, an iron meteoroid seared through the Earth’s atmosphere and split into eight or more massive fragments over Greenland. The Innaanganeq meteorite — also known as the Cape York meteorite — is one of the largest known iron rocks to have fallen from the sky.

For years, its fragments were used for toolmaking by the Inughuit that inhabited northwestern Greenland. In other words: Inughuit people used space knives.

This fact, featured in a viral Reddit post on r/todayilearned, spurred an Endless Thread deep dive into the forgotten history of this meteorite — one that revealed a story of American exploration and exploitation abroad.

”But perhaps, the highlight of this, virtual artistic happening is Hivshu’s singing and musings on indigenous life. Edited over the vast expanse of the arctic tundra, technology enables us to see the practice of ‘Yoik’ in action; we are given the chance to see, hear and feel Hivshu’ s voice spiritually resonating with the subject it is singing about, just as we would if we were around a fire with them.”

Consciousness is the Connection

The life is not about being a superior. Life is not about being powerful and rich. Life is absolutely not about the man-made values that divides people into "with us or you are with them" mindset or to make fellow human beings to be enemies. Life as a human being is not about being smarter or loser. These are man-made mindset to distract away from the reality of life and no importance to the life! The brain and the mind are part of the physical body that do not have the power without the consciousness. The consciousness is the cosmos, the universe, the life, our ancestors. Their connection to us is our consciousness. The life on the Earth is about living the life to feel the deep emotions the life is giving us. We all agreed to do this mission to complete ourselves to understand the higher level of the consciousness without having memory. The mission is to live the life on the Earth to gain the consciousness to a higher level.

Inuit the Arctic People do not have any word for war. The translated the colonists word for war as "the crazy man's work" or "insanity of the mind of a man". The so-called civilisation is not civilised when they can not even communicate to keep the life of many and for the peace.

Let the Arctic be a non-military site where the peace and comfort for peaceful people can be lived. кilaut that means the consciousness - the inuit drum - is the way to communicate to solve any problems. A drum and song to express the deepest part of human expression.

In the podcast ”Visdomsjakten” you can listening to a recorded interview made by Josefine Thureson Kämpe where Hivshu talks about the life in Arctic, about Inuit peoples’ worldview, wisdom and traditions, about their view on nature and the human journey as a process. He also talks about their stories how universe come to be, their songs, elders, and ancestors, what it means to be a shaman and why we, as humans, are here on earth. He also talks about his opinion on the modern way of life in Europe, religion, and our consciousness. On top on that, you can hear some beautiful singing. Enjoy!

To the top
Home